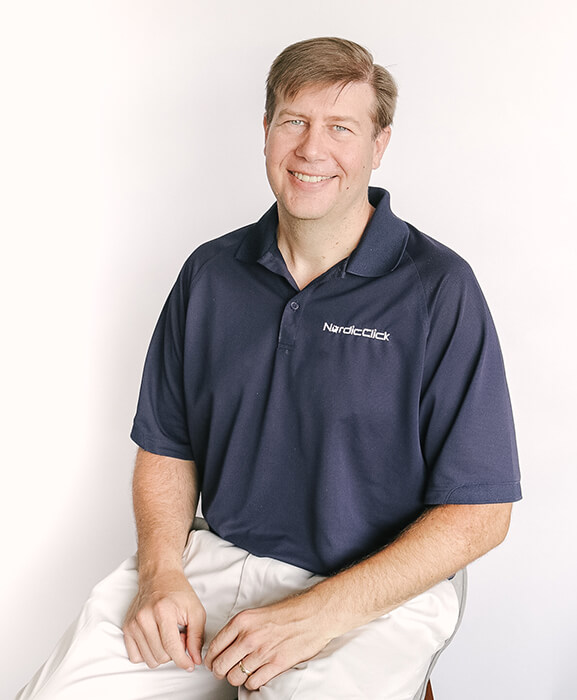 Adam spends the majority of his time working on new business initiatives for NordicClick. Those business initiatives can include new agency clients, working to expand our service offerings in areas that make sense, as well speaking and contributing to various industry events. He also serves in an Executive sponsorship role for many of our key clients. His primary role there is to help drive the strategic direction of the client’s digital initiatives and provide support for teams within NordicClick that work on them.

Adam is a 20 year digital marketing veteran, who cut his teeth working for Digital River (a global e-commerce provider) in the late 90’s. He spent almost nine years there during the “golden age” of the online marketing world, working on such clients as Symantec, Autodesk, Motorola, and Connectix.

He has spoken at several industry conferences over the last few years including SMX, SES, Pubcon, OMS, B2B, eMetrics, and DMA. He is also an instructor at the Online Marketing Institute and the University of San Francisco.

When he’s not working, Adam loves doing home related projects so much that he often judges the success of his weekend based on how much he got done. It’s not all about work though for Adam, he enjoys anything that gets him outside during the summer, whether that be simply picking up a good book or spending time on the water. On average he gets through a book a week, alternating between fun and business related books.

1. What is your first memory of the Internet?
It was spring of 1993. I was in the computer lab at Mankato State University and I saw this guy sitting next to me furiously typing away. He sounded irritated and I asked him if he was alright. He explained that he was having an argument with a friend in Seattle about a Star Trek episode. My honest first impression of the internet was how lame it was.

2. Favorite memory of the lake? What does being on the water mean to you?
Now I’d say my favorite lakes memory is probably when my kids learned to love it so much that they begged, and begged to get out on it. To me, being on the water gives me clarity as well as memories.

5. If you were a cartoon character, which one would you be?
Tasmanian Devil. I’ve just always loved Taz. He can be (very) disruptive, but at the end of the day he’s a big softy. I used to do a mean impression of him, but when my daughter was younger, I think I scared her once, so I haven’t done it since.

6. Snack you could live on?
Popcorn

7. Favorite travel location?
Kauai – I’ve gone every year for the past ten with my family and it’s become like a second home.

8. Speed boat, jet ski or pontoon?
A jet ski all the way. It provides an outlet for the side of me that refuses to grow up.